In continuing my research into those who are buried in this historic cemetery, I never cease to be utterly amazed at some of the most unexpected and remarkable storylines that emerge. Such is the case of Eleanor Children, who died in March 1850 aged 81 & who’s last resting place in St Davids remains known only to God, together with that of her husband George who died 28 years later in 1878. The ravages of time, abandonment, dereliction and decay have seen the disappearance of the memorial to this most interesting of families so they have no known grave.

What is equally intriguing is why they came to Carmarthen in the first place, when they could have lived and retired to the most fashionable part of London. Even more fascinating is the fact that towards the end of his life George Children became the Innkeeper of the Railway Inn next to his house on what we now know as Jail Hill (on account of the former Goal being nearby) Indeed it must be the only time in history that an Innkeeper can claim to have had such a distinguished father in law!

In fact, Eleanor’s father Charles Hutton FRS FRSE LLD was one of, if not the most eminent surveyor and brilliant mathematician of his day. In 1756 Charles Hutton, aged 18, dropped out of his career as a coal hewer on north Tyneside. He’d hurt his right arm in an accident years before, and it wasn’t strong enough for the coalface.

He was a clever boy, and coincidence gave him the opportunity to take up teaching instead, in a local school. It was a momentous decision, and it took him on a journey he could never have imagined. By the end of his life the miner’s lad was Professor of Mathematics at the Royal Military Academy and a fellow of learned societies in four countries. Admired, loved, even revered by three generations of students, he’d successfully defied the Royal Society of London and become the leader and spokesman for British mathematicians. His books were read from Pennsylvania to Calcutta, and if a British cannon was pointed at you in America, France, Spain or India it was probably being pointed by one of Hutton’s students. When he died, the Duke of Wellington and the Lord Chancellor  led the tributes, saying that Britain would be forever in his debt.

His brilliance and outstanding ability in the field of Trigonometry, Algebra and Logarithms led him to publish 18 volumes on the subject apart from many volumes on all aspects of mathematics. He was Professor of mathematics at the Royal Military Academy, Woolwich from 1773 to 1807. 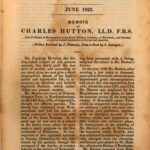 He is remembered for his calculation of the density of the earth from Nevil Maskelyne’s measurements collected during the Schiehallion experiment – a set of observations of the gravitational pull of a mountain in Perthshire made by the Astronomer Royal, Nevil Maskelyne. He was also awarded the Copley Medal in 1778, two years after Captain James Cook for his paper, entitled, “The force of Fired Gunpowder, and the initial velocity of Cannon Balls, determined by Experiments” The Copley Medal is an award given by the Royal Society, for outstanding achievements in research in any branch of science. It alternates between the physical sciences or mathematics and the biological sciences and is given every year, the medal is the oldest Royal Society medal awarded and the oldest surviving scientific award in the world.

Eleanor’s father retired from his professorship at Woolwich in 1807 at the age of seventy on a pension of £500 per year and went to live in Bedford Row, London. Shortly before his death he was consulted about the curves which should be adopted for the arches for the New London Bridge, the proposed structure having five semi elliptical stone arches. Construction of the bridge began in 1824, the year after Hutton’s death. Charles Hutton was buried in the family vault at Charlton in Kent. During the last year of his life a group of his friends set up a fund to pay to have a marble bust made of him. 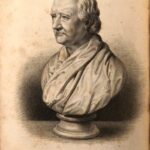 It was executed by the sculptor Sebastian Gahagan. The subscription exceeded the amount necessary, and a medal was also produced, engraved by Benjamin Wyon, showing Hutton’s head on one side and emblems representing his discoveries about the force of gunpowder, and the density of the earth on the other. Charles’ daughter Eleanor was born in Newcastle upon Tyne and was baptised on the 25th April 1769. Her mother was called Isabella. Her parents were devout Methodists. Before the introduction of civil registration in 1837, most people were baptised, married, and buried in their local Church of England parish, regardless of their beliefs. Historically, many “non-conformists” such as Methodists used their local parish church for registration purposes, despite their differences in belief. During the latter years of her father’s life, Eleanor helped to look after her father at Bedford Row in London (Her mother Isabella, having passed away in 1817) “where exemplary devotedness to her valued parent, and affectionate anticipation of all his wishes and wants he appreciated with commensurate affection” (Quote from a friend)

So when you next walk amongst the tombstones and open spaces of St Davids cemetery Carmarthen, spare a thought for Eleanor, for although she had a very distinguished, rich and famous father, with the world at her feet, she chose Carmarthen as the place to live her life, in quiet solitude and contemplation. May they rest in peace.