In the 180 years since St David’s first burial in 1841 nearly six and a half thousand burials have taken place until the cemetery was closed for any further burials in 2002. As we stand today, only approximately one thousand of those buried either have a memorial or inscription to their name. Most families could not afford the “luxury” of a memorial especially when you consider that Carmarthen Workhouse was situated in the parish and therefore responsible for all burials of those unfortunate inmates, all of whom received a pauper’s burial. These burials are by far the largest number accounted for in this cemetery. Others of course, fell on hard times, having once been prosperous businessmen and women such as the Swiss clock maker Mr Pedelina whose story, like many others can be found in the sub heading “What’s in a Name” & Mrs Elinor Children, sent to a convent in France in her teens, whose father was one of the worlds best mathematicians of his day. The burial of any family member is of course a sad occasion for us all, especially when it comes to children and infants, of which there are hundreds here, all with no burial place to visit or memorial – until now.

This Cross of Souls memorial will now serve to remember ALL those five thousand plus who lie buried here who previously never had a memorial of their own. This construction finally brings to an end the disparity between the rich and the poor and will I am sure finally bring peace to the souls of those departed. The following poem, published locally and anonymously in 1865 epitomises everything this memorial represents. May they all rest in peace.

He has departed in his youthful prime,

Ere manhood’s bloom had blossomed on his brow,

From life and all its joyous springtime

Though mournful was his fate, hushed be our grief.

Tears, thou must cease to flow, though he is gone.

From the world’s troubles he has now relief.

So must not mourn.

Thy young and gentle heart will never know

Hopes disappointed, nor the thousand ills

Which from our passions and our feelings flow,

But in thy lonely, earthy, stilly grave,

Beneath the flowers that bloom, the cypress wave,

Fit emblems of our love to thee we give –

The lasting flower of life, “Forget-me-not.”

As stands the cypress by thy early grave,

With bough that’s ever green with verdant leaves.

And sighing as above thy tomb they wave

So will thy virtues and thy memory rest

In freshness, evergreen unto the end.

And when a memory of thee fills our breast,

Our sighs will blend.

As drooping low, and weeping, it appears-

Is but a symbol of our love for thee,

The construction of this wonderful memorial would not have been possible without the help and support of many individuals, friends, and supporters, and the trustees of the Thomas & Elizabeth Mayhook Charity will be forever grateful for their support. In particular special mention must be given to Richard Holmes of Holmes Contracting who has given up a lot of his time, free of charge to carry out a lot of the preparatory work for the memorial, together with members of the Mackworth Club of local Freemasons who have been particularly supportive of the charity. Also Phillip Bowen of Tumble Memorials who arranged for the delivery of the black granite cross and it’s erection with the help of Carmarthen Athletic Rugby Club under the supervision of Brian Powell. Captain James John the permanent staff officer at Picton Barracks together with his staff were extremely helpful and Mrs Elaine Jenkins aided by Helena provided us with much needed refreshments after the consecration. Mention must also be given to Professor Medwin Hughes DL, Vice Chancellor of Trinity St David’s University & “friend” of the charity for his unwavering support and indeed ALL the “friends” and supporters of the charity too numerous to mention whose financial contributions and voluntary support help sustain the charity in it’s endeavours to maintain and preserve this historic cemetery. Thanks also to Iwan Evans, of Glamor Evans and Son for providing us with the service pamphlets on the day.  Finally I would like to thank Her Majesty’s Lord-Lieutenant of Dyfed – Sara Edwards for unveiling the memorial, & to the Venerable Archdeacon of Carmarthen-Dorrien Davies for consecrating the memorial and the Right Honourable Mark Drakeford MS – First Minister for Wales for attending the ceremony and laying a wreath on behalf of the people of Wales. A fitting tribute indeed.

I am very pleased to publish the following text, from a letter received from Her Majesty’s Lord – Lieutenant after the unveiling ceremony………

It was a great pleasure to join you for yesterday’s unveiling and consecration of the Cross of Souls memorial at St Davids cemetery, and I write to congratulate, and thank you, for all your hard work in making it possible.

It was a privilege to be present at such an important historical occasion for Carmarthen, and emotionally one that will mean so much to so many.

I would be grateful if you would convey my congratulations and thanks to all trustees, friends, and supporters of the Thomas & Elizabeth Mayhook Charity, and again my thanks and good wishes to you.

Her Majesty’s Lord-Lieutenant of Dyfed

The photographs that follow tell the story of the construction of the memorial from start to finish.  The first photograph is an image taken by the Ground Penetrating Radar (GPR) courtesy of Leica Geo systems using the world’s latest technology. Before the mini digger arrived to dig the foundations a scan was taken by GPR of the area in question to ensure there were no burials in that area of the cemetery and when we were satisfied that this was the case, work then proceeded accordingly. It is interesting to note the image contains some bright orange areas of the cemetery and these represent “high density” patches likely to be either stone/marble or ironwork close to the surface, in all probability fallen memorials and railings. The deeper the scan the more detail the images provide. Most of the photographs speak for themselves in showing the progress of the work involved finally leading to its unveiling and consecration. It is worth pointing out also that the base of the cross has twelve discarded grave markers surrounding it, cut and cemented into position, some with initials and dates and some without. The thirteenth grave marker was re-engraved with the Cross of Souls inscription that lies in front of the memorial. The large stone base of the information panel that sits alongside the memorial was previously a side panel made for a “box tomb” that had long since collapsed and was specially chosen for this purpose. An image of the information panel itself is featured at the end of the photographic gallery. Grateful acknowledgement and thanks are also given to Mr Jeff Moreau who took the photographs of the unveiling and consecration.

In the beginning…. a “time slice” image of a GPRS (Ground Penetrating Radar Survey) scan of the area to be used for the construction of the memorial carried out by Leica Geosystems using the worlds most powerful and latest radar technology. The orange areas represent “high density” objects such as stone or metal & the white triangular area to the right is a family vault. 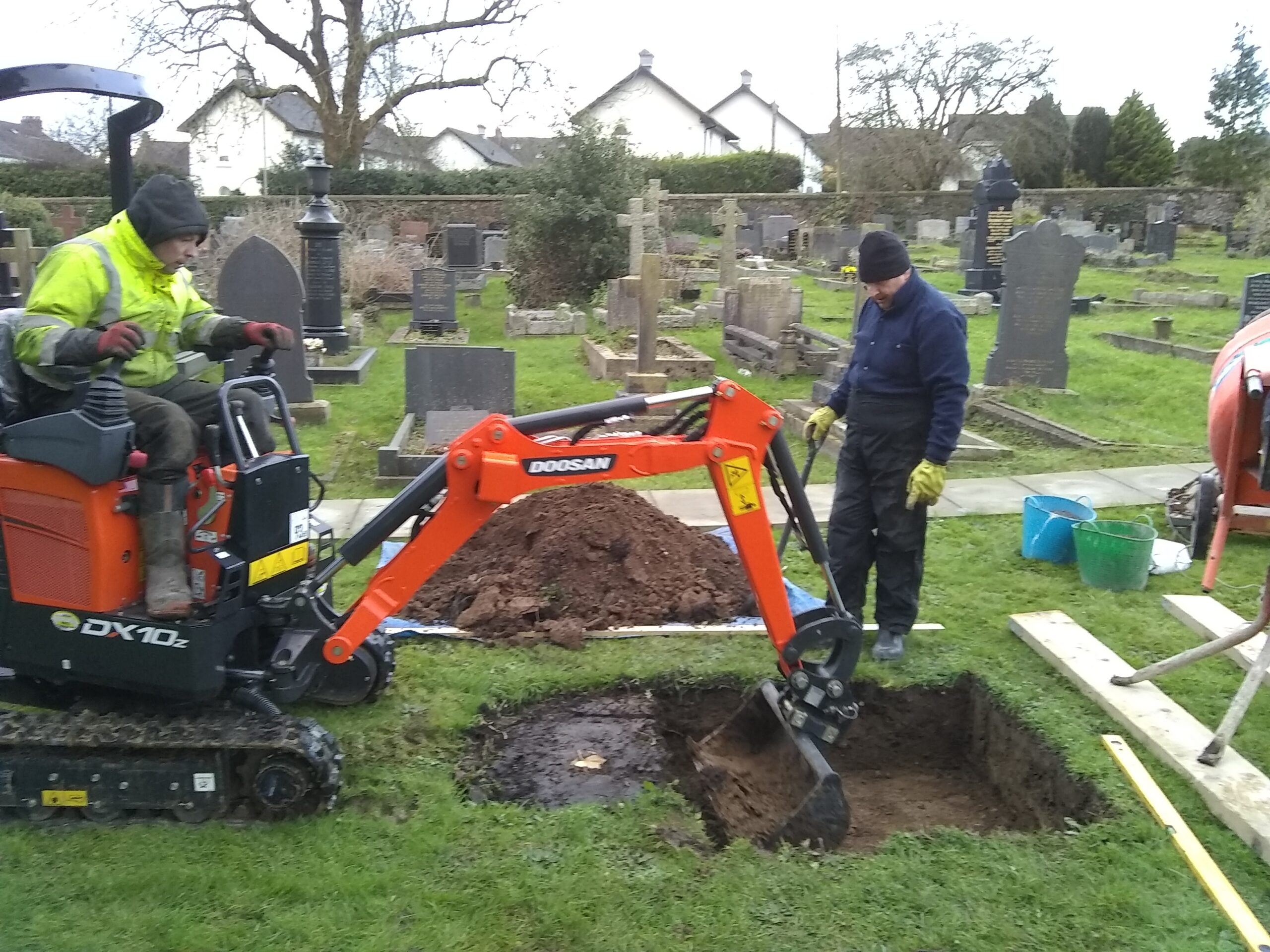 Where it all began……Richard Holmes of Holmes contracting carefully digs out the foundation for the memorial.

The concrete base, ready for the cross to be inserted (left) and Robert Goodridge(Trustee) inspecting the concrete foundation prior to the side panel of the box tomb being laid on top to form the base of the information panel.

The twelve grave markers found scattered around the cemetery (top left) being carefully laid out before cutting and positioning (right) and the thirteenth marker re-engraved at the front. The base of the information panel made from a collapsed side panel of a box tomb (bottom left) & the rose bed after it’s extension (right) with the base of the memorial under green sheeting beyond. 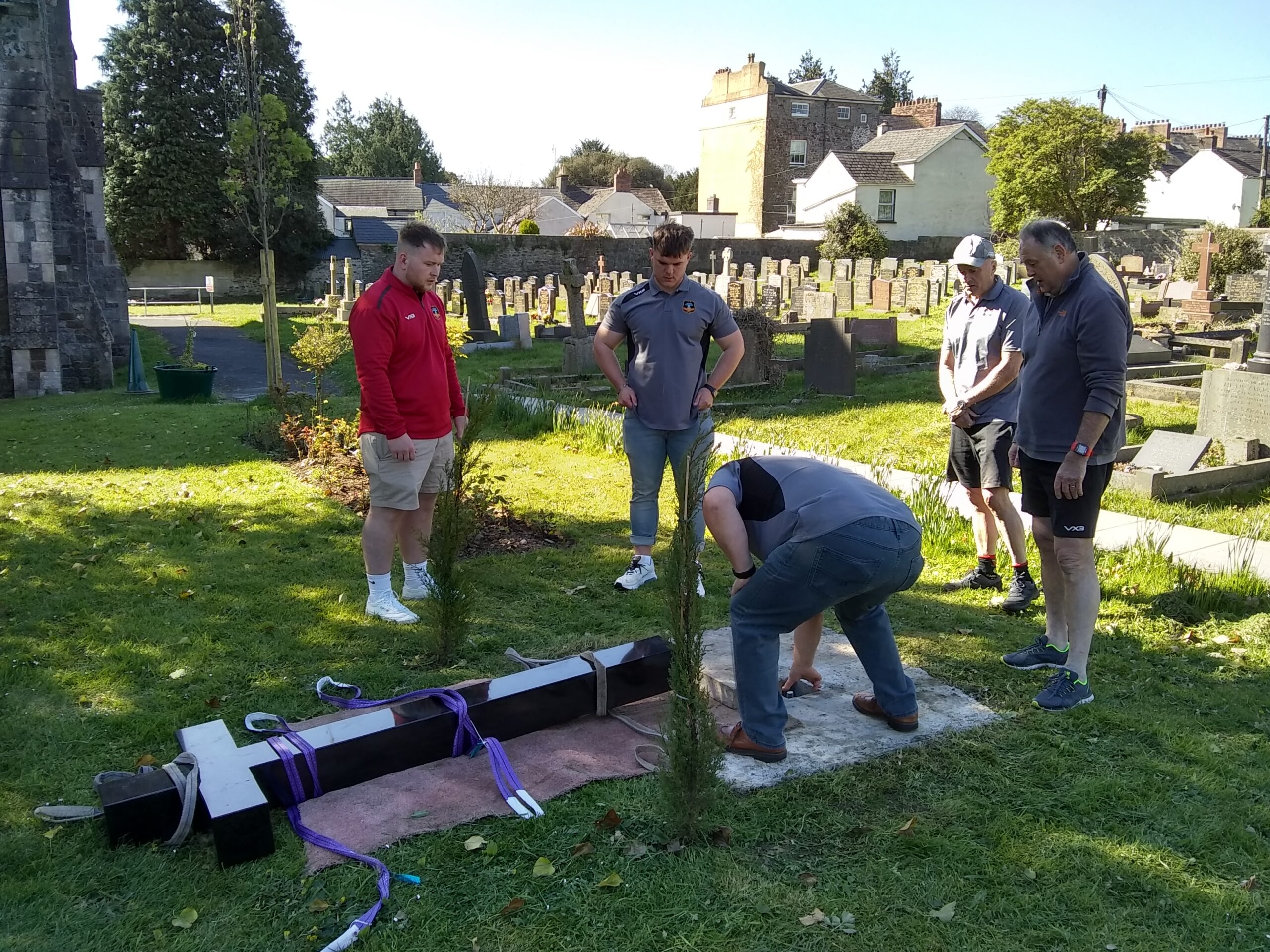 Members of the Carmarthen Athletic Rugby Club positioning themselves ready to insert the cross into the base. 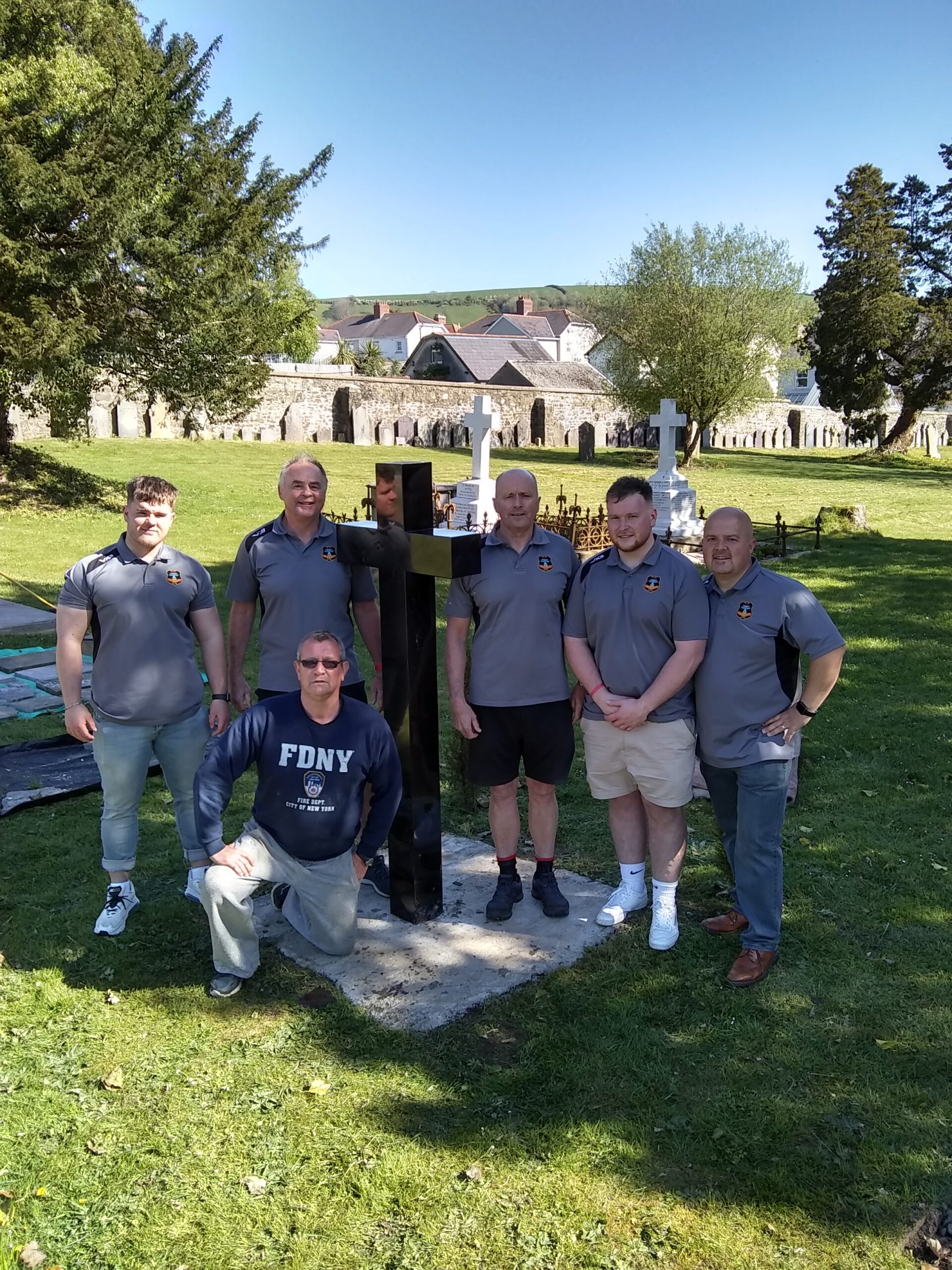 The “Athletic team” who carried the cross into position – namely Royston and Tom Massochi, Mike Edwards, James Nunian, and Brian Powell. Phillip Bowen of Tumble Memorials (kneeling) was the stonemason responsible for overseeing the positioning of the cross and securing it into the base. 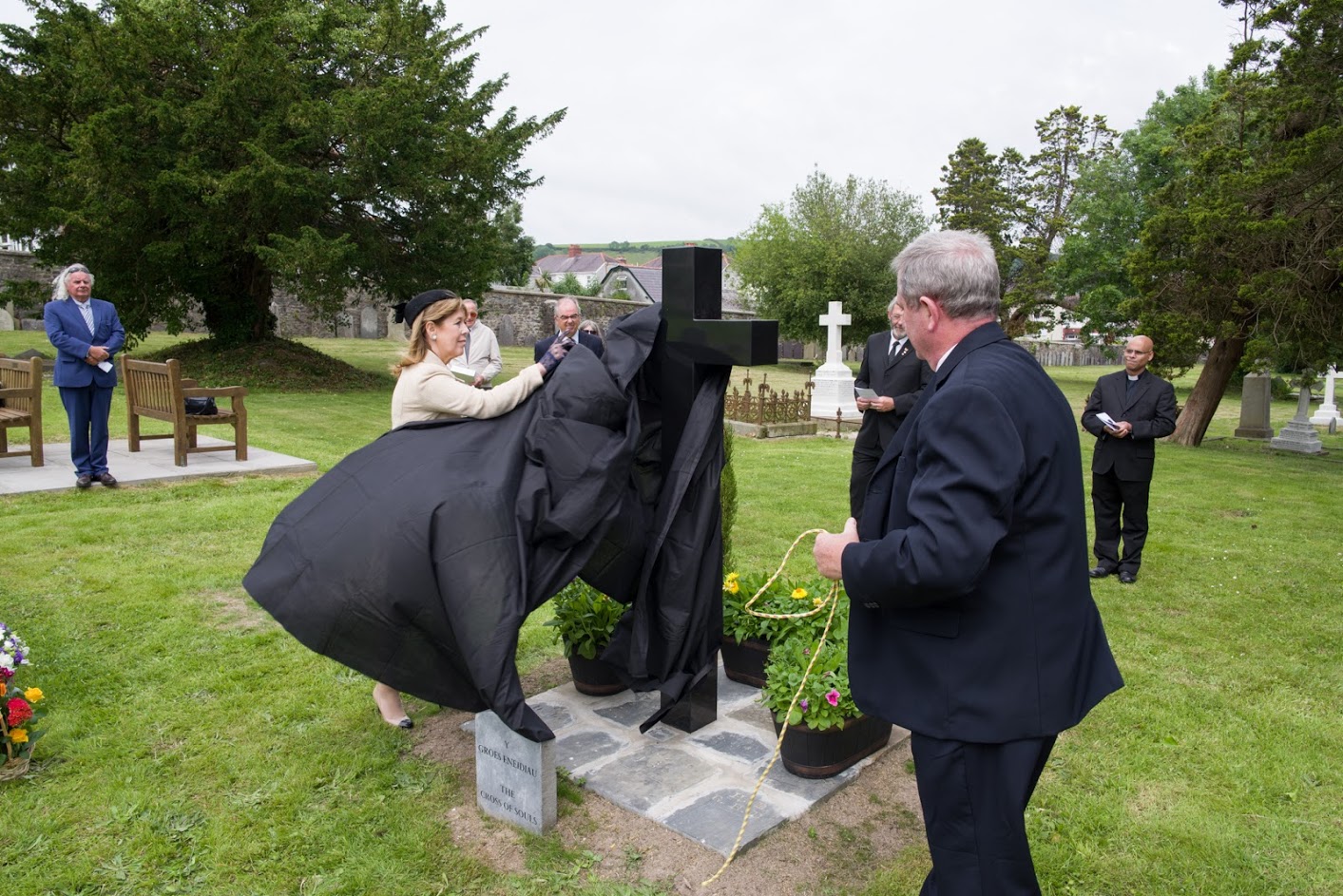 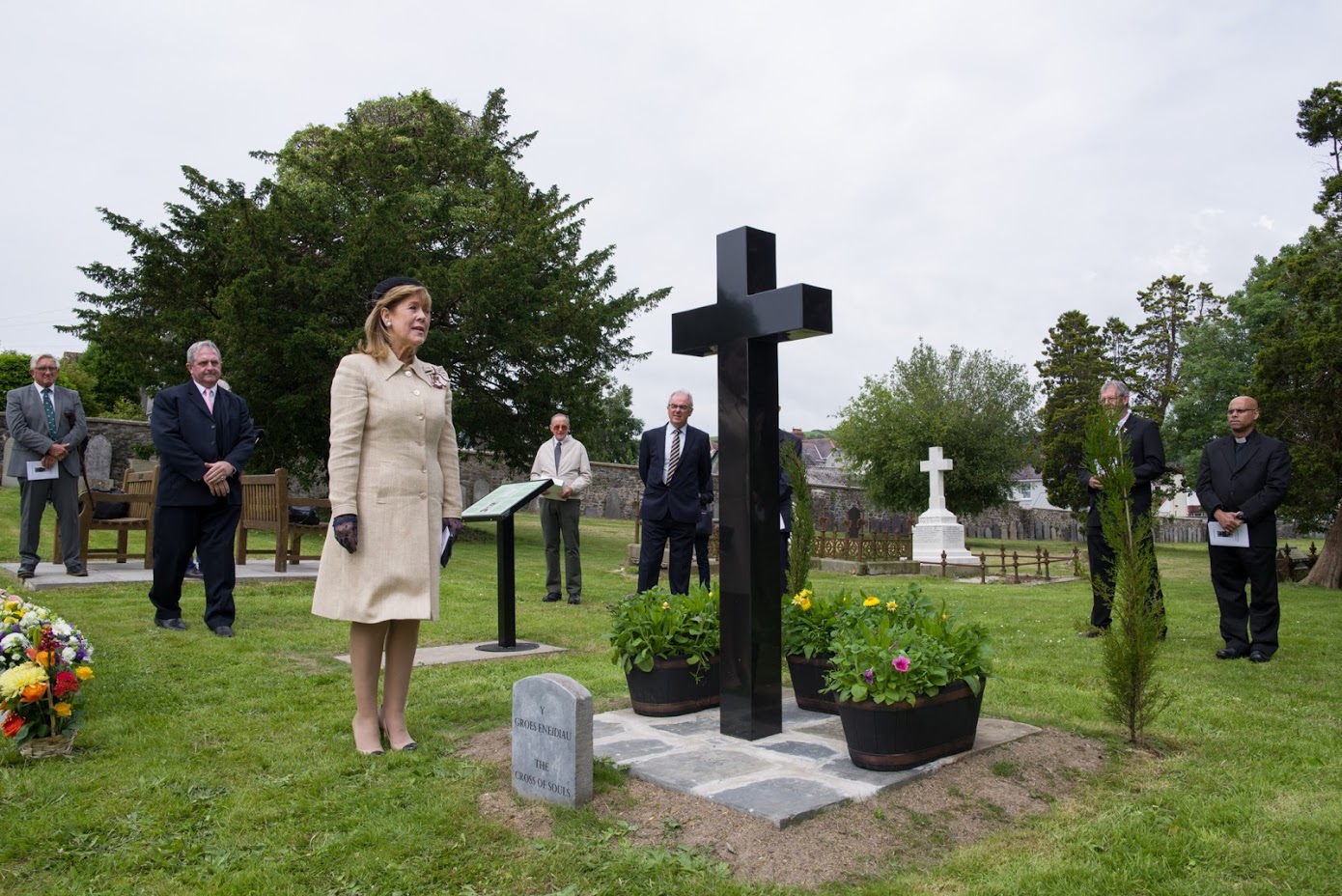 Her Majesty’s Lord-Lieutenant of Dyfed , Sara Edwards unveils the memorial. 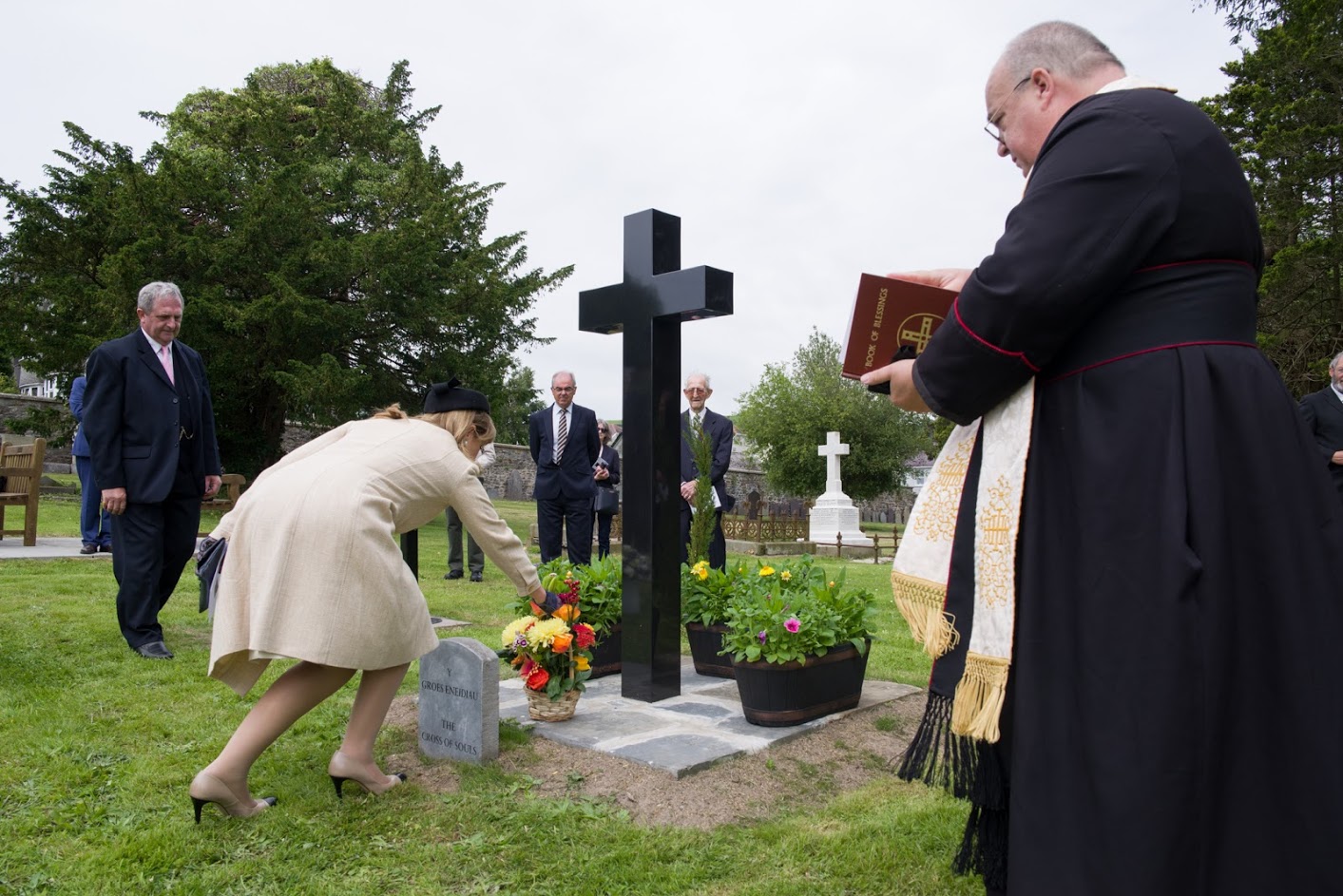 Her Majesty’s Lord-Lieutenant lays a basket of flowers at the memorial after unveiling it. 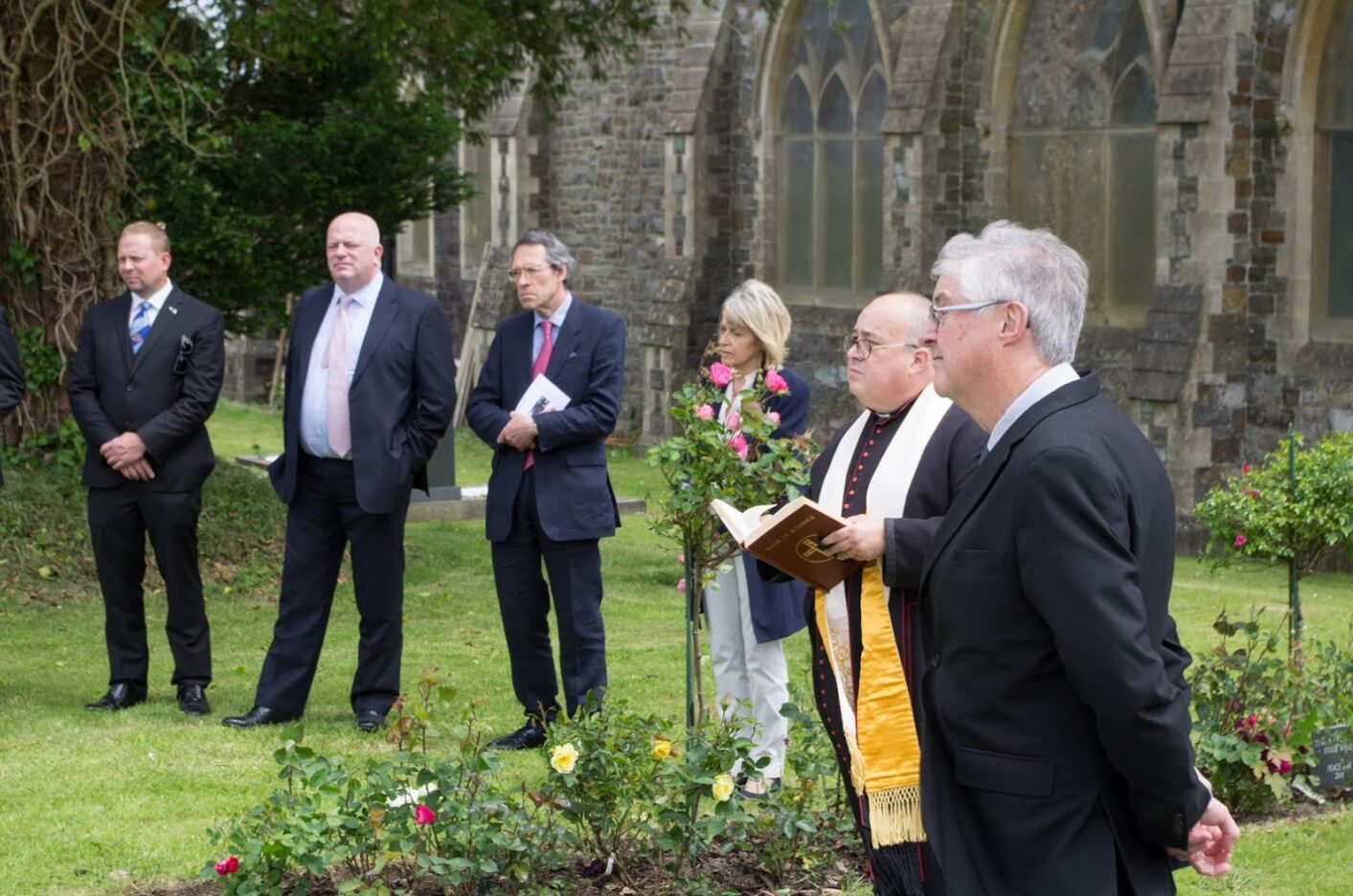 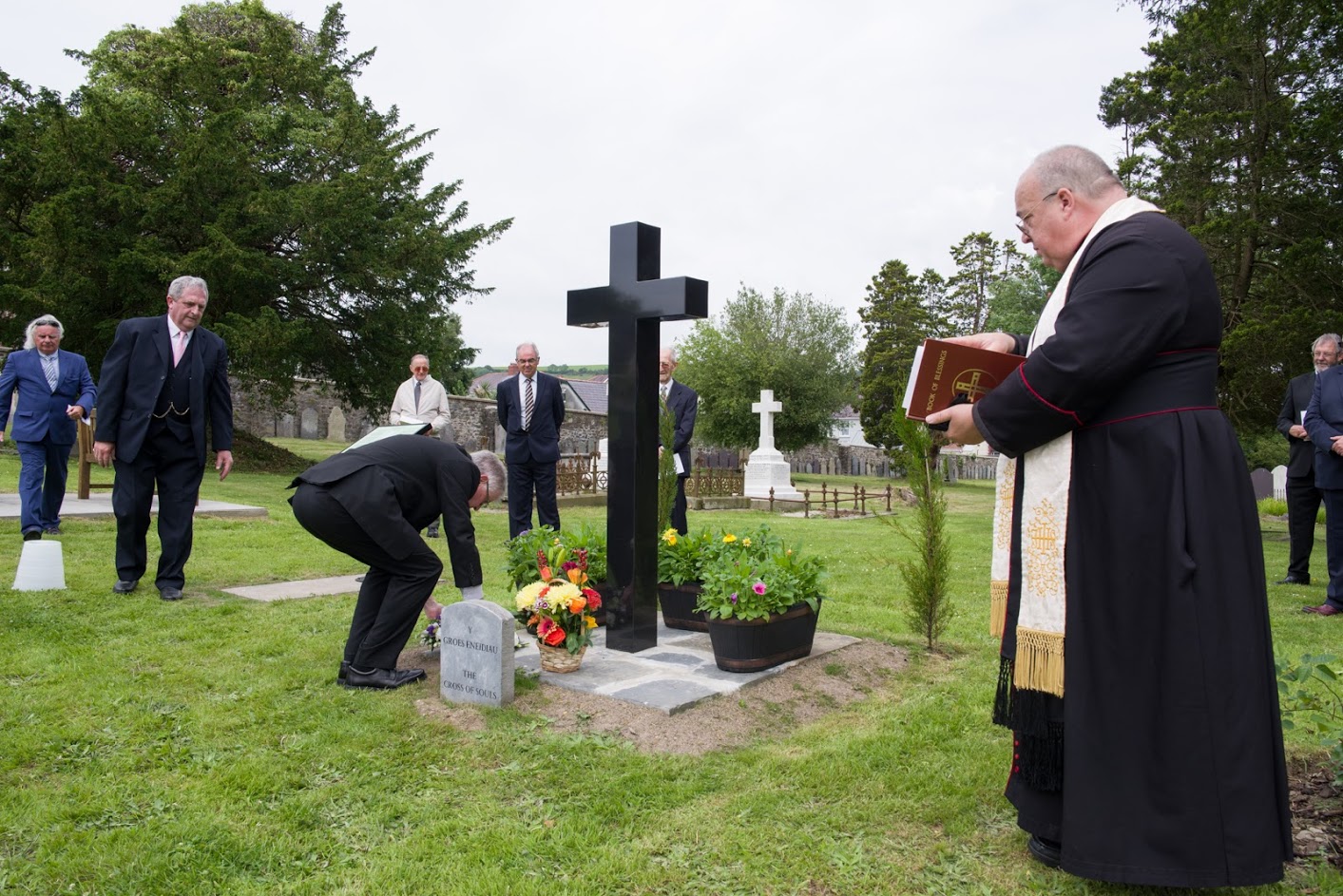 The First Minister of Wales lays a wreath on behalf of the people of Wales. 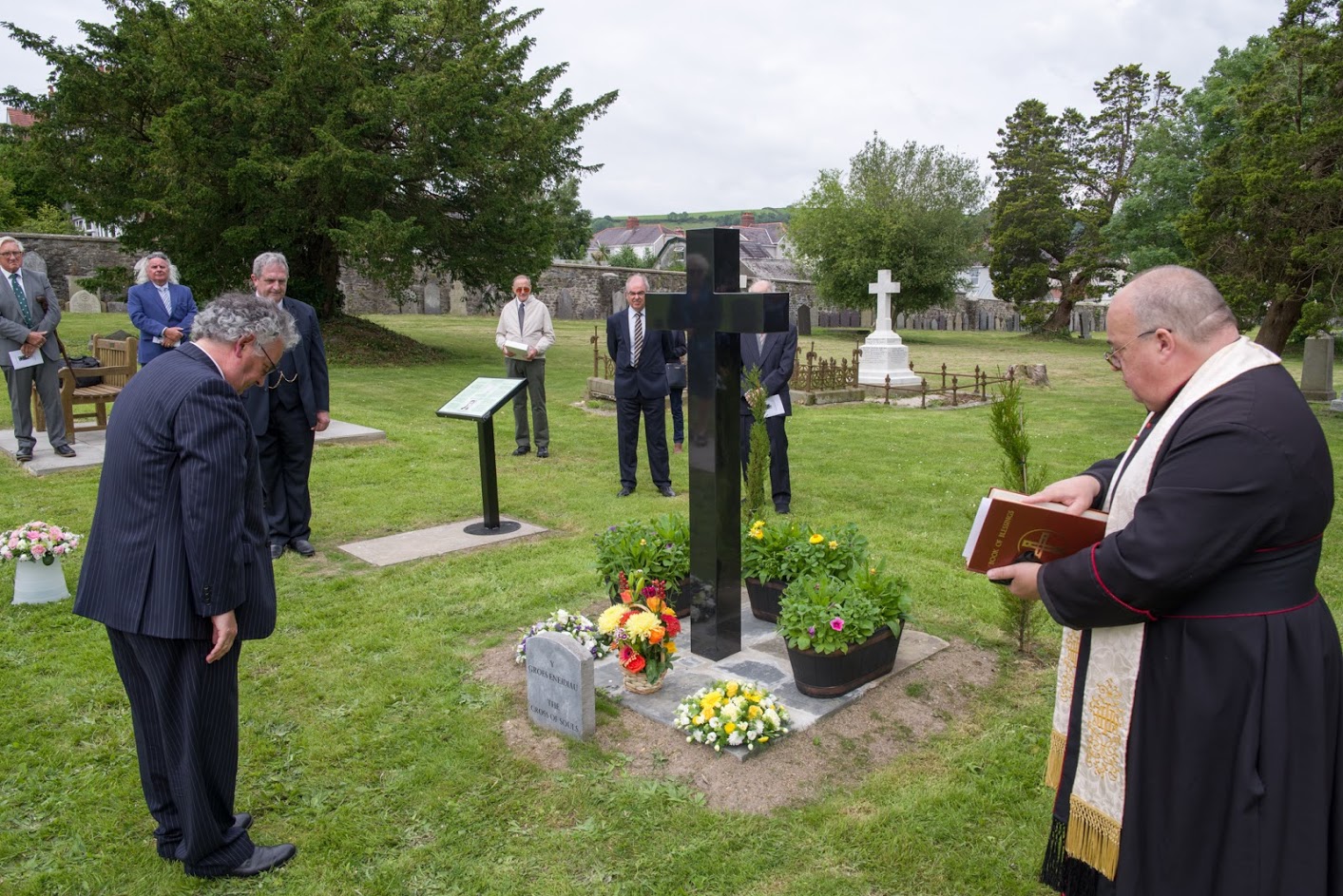 Professor Medwin Hughes, Vice Chancellor of Trinity St David’s University lays a wreath on behalf of the Friends of the charity.

Mrs Margaret Curtis lays a wreath on behalf of the Trustees of the charity.

The First Minister of Wales in conversation with Roy Bergiers – Friend and supporter of the charity. 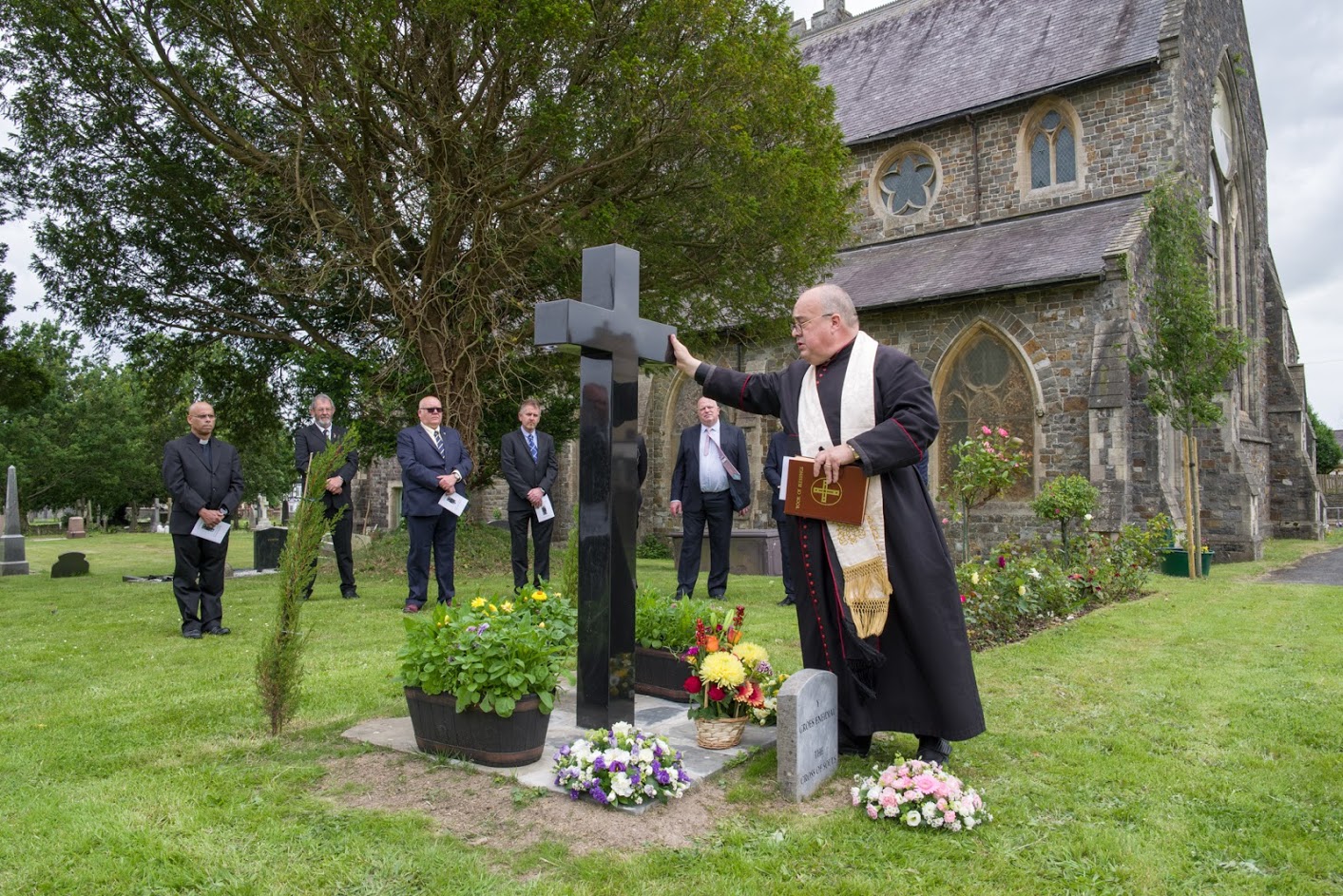 The Venerable Dorrien Davies – Archdeacon of Carmarthen blesses and consecrates the memorial. 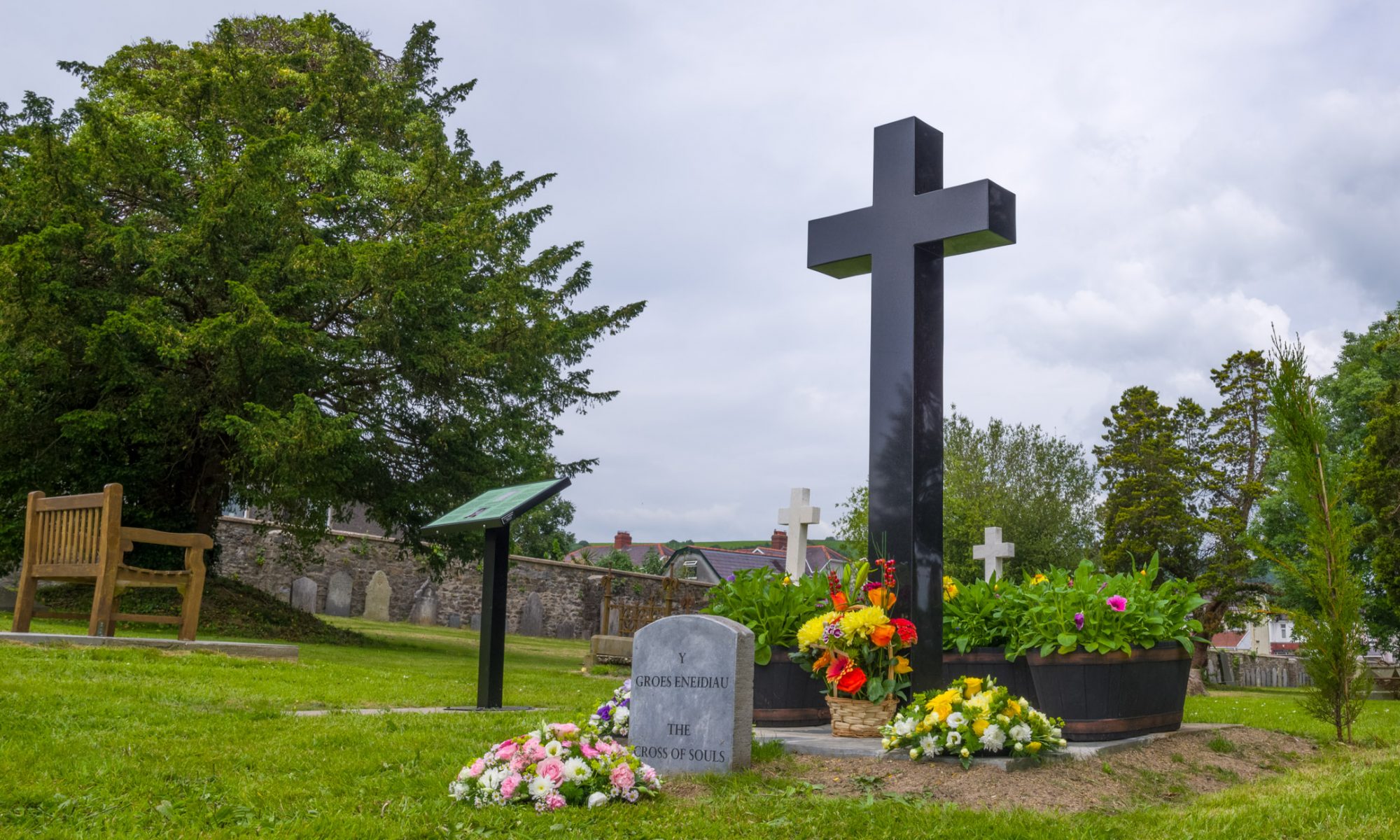 The memorial in all its glory, a most fitting tribute.

You can use your mouse to zoom in and pan around this image or navigate using your finger if you are on a portable device, iPad, phone etc.

The 360 imaging and drone video footage below were produced by Gary Chuter from Shuttermadness and Jeff Moreau.