The Reverend Thomas Rees Walters was Vicar of St David’s Church Carmarthen, prison chaplain, and Proctor in Convocation (The main purpose of the Convocations (meetings) was to take counsel for the well-being of the church and to approve canonical legislation, the meaning of the word Proctor was to “represent” – it was a very important role within the church which was carried out with great effect by the Rev Walters. He was one of three brothers, the Reverend W Walters who was the Rector of Rudbaxton in Pembrokeshire, and Doctor St Gynlais Walters, a world class physician on Tropical diseases who worked for the United States Government in Honolulu being the other two.

Their father, the celebrated Reverend Canon Dr T Walters (Doctor of Divinity from Dublin) lived in Llansamlet and is buried in Ystradgynlais. Unfortunately, being a prison chaplain at the time when Capitol punishment existed inevitably meant that at some point in your career you would be called upon to preside over an execution and such was the case of the Reverend Thomas Walters here in Carmarthen whilst serving as the Prison Chaplain.

The crime of murder was exceedingly rare and always involved people, with a close, often family relationship. There were no executions in Carmarthen for almost 60 years between the hangings of David Evans in 1829 which was a public execution, and David Rees, “the Llanelli Murderer” in March 1888 –the subject of this story. David Rees was convicted for the gruesome murder a messenger carrying money for the payment of wages at the Dafen steel works, though his confession remains suspect even to this day as no money was ever found.

By this time executions were no longer public, but the crowds would still gather outside the gaol to share the thrill of the grim proceedings. Tickets were issued to the press however for them to witness the occasion.

The hangman or executioner as he was most commonly known was on this occasion a man called James Berry who arrived in Carmarthen on the 12th March 1888 to execute David Rees for his crime, having carried out another execution the previous day. During his “career” as executioner between 1884 and 1891 James Berry carried out 131 hangings including those of five women. This would be the only time he ever visited Carmarthen.

The following is an extract from the Carmarthen Journal..

“Berry arrived in Carmarthen by the 3 o‘clock train. On the journey down he was not recognised until he reached Carmarthen Junction, where as he waited for a train to carry him to Carmarthen Town, a great crowd collected and gazed upon the public executioner with mingled feelings of wonderment and awe. The news quickly spread from the junction to the town station, and on arriving there he found that his fame had preceded him. As he walked to the gaol, he was followed by a motley mob who hung around the portals of the prison for some time after the executioner had disappeared from view. The gallows were fixed up as a permanent structure. It is paced on the west side of the prison yard, next to Nott Square. The trap doors are on the same level as the ground so that the necessity of climbing up to the drop is dispensed with. The pit is excavated to a depth of ten feet and the sides are bricked. At the side is a manhole for the use of an attendant in case of any hold up. From the platform to the cross bar is a distance of seven feet. James Berry commented that this scaffold was one of the best he had used. The convict weighed nearly eleven stone and the drop would be about six feet, and this as a result of the experience of the executioner would exercise a strain of nearly 27 hundredweight”

All was now ready, and executioner Berry drank his nightcap with the Governor in his warm and cosy living quarters, whilst a few yards away in the bleak and bare sick ward David Rees awaited his fate. During his time in the gaol, the Reverend Walters visited David Rees twice a day.

The following day, Tuesday 13th March 1888 dawned and David Rees arose from his bed and for the last time on this earth had bread and butter with a glass of milk before being joined by the Gaol Chaplain, The Reverend Thomas Rees Walters who remained with him until the end, preparing the crying and shaking man for his imminent meeting with his maker – for the dread traditional hour of 8 o’clock was but an hour and a half away. Outside the gaol gates the mutton-chop whiskered Chief Constable Brown-Edwardes mustered his men as the crowd began to swell as the hour approached….The Carmarthen Journal continues the story…….

”At about a quarter to eight the Chapel bell began to toll and the press and officials were placed in the long corridor of the prison opposite the cell. At ten to eight the executioner, Berry, appeared dressed in a plain suit of dark clothes and wearing a red Turkish fez, bringing his pinioning straps with him. The executioner is a light complexioned quiet looking man about thirty years old with a light moustache, small short beard and whiskers, and bright brown eyes presenting altogether an appearance entirely unlike what generally might be expected of a public executioner.

At three minutes to eight Berry went into the condemned mans cell to pinion the arms of the convict, during which the unhappy man was crying bitterly and had to be supported by two warders .At a minute to eight the sad procession started from the cell and proceeded to the scaffold, Reverend Walters reading the burial service. The prisoner, who appeared to walk rather weakly, supported by three warders, appeared to be terribly distressed and seemed to be listening very attentively to the service which was read most impressively by the Reverend T R Walters.

As the mournful cortege reached the top of the steps leading to the prison yard David Rees seeing for the first time the scaffold before him cried “ Oh Arglwydd Anwyl”(Oh Dear Lord) The procession on reaching the gallows halted while the convicted murderer, executioner, and Reverend Walters prepared for the final act. David Rees was placed on the centre of the trap while the rope was adjusted around his neck by Berry, and the brass ring forming the noose was placed under the left ear, the white cap then being pulled over his head. The prison chaplain – Reverend Walters all this time had continued reading the burial service in Welsh, in which the unhappy man joined repeating the responses and occasionally shaking his head. At about one minute past eight at the words “Duw a drugarah wrthyf” the leaver was pulled. The drop fell and Rees was launched into eternity. As the drop fell the black flag was hoisted above the female wards facing Spilman Street”

Jack Berry stayed in Carmarthen for a further two hours before taking his leave and on departing remarked “Good morning gentlemen. I hope you will never want me here again” – It was his one and only visit……. for the Reverend Thomas Walters however it must have been a harrowing experience in having to cope with such an event, which I doubt he ever thought he would be involved with but as we can see from the reporting of the press at the time, he seemed to have prepared himself well for the ordeal which was nevertheless to have an everlasting effect on him. 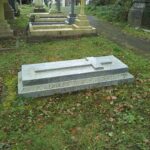 Reverend Walters’ went on to have a very successful ministry and was very much part of Carmarthen’s fabric and way of life, bringing up four children and being involved in many organisations. Being a clergyman in Carmarthen was not an easy task in those days, but to his credit he was top of is class in all that he did.  His last resting place together with his wife is thankfully in very good order owing to the fact that it is very low lying and made of substantial polished grey granite resting alongside  the east wall of the church.