The now world renowned Trinity St David’s University began life as the South Wales & Monmouthshire Training College in 1848 here in Carmarthen thanks to the then Bishop of St David’s Connop Thirlwall and the Reverend David Archard Williams (whose story can be found elsewhere in “What’s in a name”) founder of St David’s Church and Christchurch and also of the Model School, formerly in St Catherine Street.

The Model School was built in 1847-8 to designs probably by Henry Clutton. The purpose of the model or practicing schools was to give practical experience to the trainee teachers at the training college (Trinity College) then being built to Clutton’s design. When the school was opened W. P. James, contractor for Trinity College was named as the architect and contractor. The Model school was opened in 1849.

We know from the records that exist that David attended the Model school at the beginning of March 1892 as part of his training and in April was taken ill and unable to attend any lectures, suffering from a series of severe nosebleeds. Fellow students then helped by getting his medication for him from town and he was able to resume studies and private lectures. In June he became ill again and on the 2nd September he left the college and returned home – sick. He died in his fathers arms on the 27th October. Today the University is one of the best known educational establishments in the country. It was the first training college to be established in Wales. The number of Anglican residential students remained at a maximum of 60 until 1903 when a further 20 day students were added. In 1957 women were admitted for the first time. St David’s Cemetery and the University are inexorably linked through its name and history, with its founder and many of its former teachers and two former Principals and their families being buried here. As readers of these stories will know the Trustees continually strive to restore the cemetery and to repair where possible many of the memorials under it’s care and none more so than the very decorative pink granite memorial to the PHILLIPS family that had laid buried in the ground for over 50 years, no one knowing who was buried there, a family forgotten – until now. 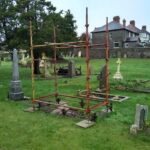 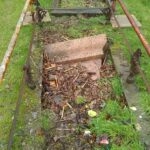 The following very short obituary notice that appeared in the Western Mail is the only notice to have appeared in the press and no obituary exists. However one can only assume that the funeral must have been an extremely large one attended by all 60 students and their tutors. The College in the 1890’s was one of camaraderie, and friendship, with a desire to obtain respectability in life by becoming a teacher and also to be able to offer those young children whom they taught an education and a better chance in the world. 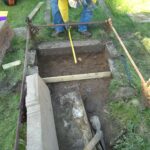 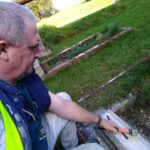 By restoring this memorial the Trustees have re-forged the link between the University and St David’s Cemetery. The Trustees are also very grateful for the support shown by the Vice Chancellor of Trinity St David’s University, Professor Medwin Hughes DL who has been most complimentary of the work of the Charity in restoring the cemetery, so much so that he paid a visit to the cemetery last week to pay his respects to David George Phillips and lay some flowers at the graveside. After 128 years young David is now, once again remembered by the University, may he rest in peace. The Trustees are very grateful to the Special Collections Department of Trinity St David’s University Lampeter for assistance in the research of this article and for allowing a number images to be reproduced.

Death of a Student …….much regret has been caused among young men in Carmarthen by the death, which took place on Thursday morning, of Mr. David George Phillips, one of the most promising of the first year students at the South Wales Training College, Carmarthen. The deceased, who was the son of Mr. T. Phillips, foreman at the Welshman, was only 19 years of age.

The splendid group photograph of the 60 Carmarthen Teaching Training College students in 1898 – six years after the sudden death of David George Phillips, epitomises what life was like, nearing the end of the Victorian Era in an establishment that whilst strict in it’s methods of teaching, was every much a place of humour where students were at ease with the world. Clearly the photograph was taken with “PIPE SMOKING” being the main object of the “lesson” but what cannot be seen in the photograph are their handwritten surnames in ink in the margin together with their respective humorous “nicknames”. I have included some of them for your information, surnames followed by nickname. The very sad side to this photograph is that several were killed in the Boer War that followed two years later and many were killed in action fourteen years later during the first phase of the Great War in 1914.